These one hour cinnamon rolls are super soft, delicious and slathered with an amazing melt-in-your-mouth frosting. Just as yummy as the classic cinnamon roll recipe, but done in half the time!

One of my all-time favorite things to make around the holidays is overnight cinnamon rolls (and my sweet orange rolls). They are so fun to make with my kids and are such a yummy treat. Let’s be honest though…sometimes they just take way too long. I’ve finally come up with a quick cinnamon roll recipe that tastes just as yummy and is done in HALF the time!

This is one of my favorite breakfasts to make for Christmas morning. You can make these cinnamon rolls in one hour (okay plus a few minutes) and they turn out amazing. They’re soft, fluffy and have the best cinnamon sugar flavor. They are perfect for my family of 6. We really don’t need more than 1 cinnamon roll each…so 8 is the perfect amount for us! Feel free to double the recipe though if you have a bigger family or want leftovers.

How to Make 1 Hour Cinnamon Rolls

Rising tip: If you don’t have a warm spot in your house, turn on the oven to 200°F and then turn it off. Then place the dough inside to allow to rise.

The creamy and rich cinnamon roll frosting is what takes these rolls over the top. I prefer a thicker frosting, but you could also make a thinner cream cheese glaze if you want a more subtle taste and texture. A tangy sour cream frosting is also a good alternative if you don’t have any cream cheese on hand.

What type of yeast do you use for one hour cinnamon rolls?

You’ll need highly active yeast (or rapid rise yeast). That’s what makes this recipe so quick. The rolls won’t rise as fast if you use traditional yeast.

What do you do if the dough is too sticky?

Just add a little more flour. I would add in small increments (a Tablespoon at a time) until it is slightly sticky and smooth.

How big do cinnamon rolls get after baking?

They should be a little bigger than palm size. If yours weren’t this size, let them rise a little longer next time around.

Can you make them the night before?

You can make these up to 12 hours ahead of time. Simply roll them out and place on a baking sheet. Let sit for 30 minutes to rise and then cover tightly with foil that has been sprayed with non stick spray. Refrigerate overnight. Then in the morning, remove from the fridge and let rise about 1-2 hours before baking. Then bake as directed.

“NEW FAVE RECIPE! These were super easy to make and came out perfect. Soft and delicious. Highly recommend.” 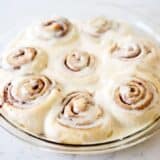 Storing and reheating: Store in an airtight container. Reheat one roll in the microwave for 10 to 15 seconds. Rising tip: Heat the oven to 200°F and place a small pan of water on the lowest rack. Turn off the oven and let the dough rise in the oven.  Making the night before: You can make these up to 12 hours ahead of time. Simply roll them out and place on a baking sheet. Let sit for 30 minutes to rise and then cover tightly with foil that has been sprayed with non-stick spray. Refrigerate overnight. Then in the morning remove from the fridge and let rise about 1 to 2 hours before baking. Then bake as directed. Freezing cinnamon rolls: You can freeze the rolls after they have been baked and cooled. Simply place in a freezer container, then set out to thaw overnight. You can also freeze the rolled dough. Simply place the rolls on the baking sheet and then cover tightly with foil. Then freeze for up to 2 months. When ready to bake allow to thaw and rise for about 4 to 5 hours. I usually let them rise in the oven for the last hour. Once they have risen, bake according to directions.