This horchata recipe is a perfect drink to pair with all your Mexican-inspired dishes! Whether you’re hosting Cinco de mayo or spending a day by the pool, you’ll love this refreshing, cinnamon and vanilla-infused sweet beverage served on ice!

With Cinco De Mayo around the corner, the wheels are already in motion thinking about all the Mexican dishes I’ll be preparing. This year I’m including this authentic Mexican Horchata drink on the menu!

There are many versions of Horchata depending on where you live, as every country and every household makes it a little differently. This horchata recipe is by far my favorite and rivals anything you’d find at a Mexican restaurant!

It’s delicious, smooth, slightly sweet, and uber refreshing which is perfect for warm sunny days on the patio. It comes together easily with ingredients you’ve probably already got and because we’re making it without powder, we just need to soak the rice overnight. Other than that, it’s so simple!

Horchata is the Mexican name given to this type of dairy-free, plant-based milk drink. It’s made from soaking rice and cinnamon sticks overnight and then used to make a refreshing creamy drink.

I say it’s Mexican because in Latin America they use rice and grains and seeds but numerous countries around the world have their version of this drink. For example, in Spain, they use tiger nuts!

Even within Mexico, you’ll find people use different ingredients, flavors, and even methods to prepare their horchata recipes.

Some use almonds or coconut for flavor. Some will strain the water used to soak it and use fresh water for the drink itself, and others will use whole milk instead of evaporated milk. There is no one right way, but there sure is the best way and this one is it!

How to Make Horchata

What to Serve with Horchata

Complete your menu with these Mexican-inspired recipes!

What type of rice is best for making this horchata recipe?


Any short grain or long-grain white rice will do. Basmati or jasmine rice are popular and are readily available in most grocery stores.

How can I store leftover horchata?


Keep it in the pitcher and cover it for easy access or pour it into any jar with a lid. Store it in the fridge for up to 3 days. Stir again before serving!


If you’ve ever had flavored rice milk, this horchata recipe has similar notes to it. It’s smooth and creamy thanks to the evaporated milk and it’s flavored with cinnamon and vanilla, with just the right amount of sweetness.

Some might compare it to egg nog! It’s not as creamy, and there aren’t any eggs in horchata, but the cool, creamy, and refreshing spiced drink has slight similarities.

Can horchata be made with brown rice?


You bet! Any short grain brown rice will do. No changes to the instructions are needed to turn this into a brown rice horchata recipe. 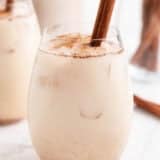 Storage: Store in a covered pitcher in the refrigerator for up to 3 days.