These easy homemade churros are to die for and are the perfect treat! Sweet, simple and so fun to make. Pairs great with homemade raspberry sauce!

Churros are one of my absolute favorite desserts. The fried pastry dough topped with the delicious cinnamon sugar mixture is seriously a match made in heaven. Then try dipping them in my sweet raspberry sauce…talk about perfection!

I’m especially excited about this recipe because it’s so simple to whip up. The dough comes together in a pan on the stove, then is scooped into a large piping bag. From there, all you do is pipe out strands of dough into boiling oil and let the churros cook on each side for a few minutes. Then roll in the cinnamon sugar mixture.

These easy homemade churros are beyond delicious and also super fun to make. Definitely give them a try…you won’t regret it!

It doesn’t take many ingredients to make this easy churros recipe. All of the ingredients are fridge and pantry staples…so you will most likely already have them on hand!

How to Make Churros

My favorite way to serve them is with some raspberry sauce that I whip up on the side for dipping. The tart raspberry sauce is a delicious contrast with the sweet, simple churros. The sauce is also quick and easy and cooks for just a few minutes on the stove.

“This was absolutely amazing.  My kids loved them and said they taste better than the ones they make in Disney Florida! And it was too easy. The surprised look on the kids’ faces was priceless!“ 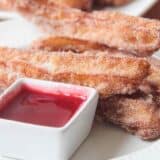 For the Raspberry Sauce:

If you don’t have a pastry bag or tip, you could use a plastic baggie with the corner snipped off. When adding the churro dough to the oil, I use scissors or a knife to get the dough to detach from the pastry bag.