This classic crockpot stuffing has timeless flavors and mouthwatering aromas! Add a little calm to the holiday chaos by making a simple delicious slow cooker stuffing!

A humble crockpot stuffing with maximum flavor is what everyone needs on their Thanksgiving menu or at Christmas dinner. It’s a no-fuss Thanksgiving side dish that doesn’t take up any room in the oven and can be left alone while the oven roasted turkey is being taken care of. That’s why this and other crockpot side dish recipes are my go-to for the holidays!

This slow cooker stuffing recipe is simple and inexpensive, especially when you’re able to use leftover homemade bread. It’s made with a celery, carrot and onion powerhouse of flavors along with the perfect amount of herbs and seasoning. It’s moist without being mushy and may very well become your new favorite side dish!

The secret to stuffing is making sure the bread doesn’t get soggy! Other than your liquid-to-bread ratio being right on the mark, you need to make sure your bread is nice and dry. Here’s how:

Dried apples: Adding in some diced apple for sweeter flavor can be a wonderful addition. Mix it in just before adding the broth.

Bread: I love French bread because of how sturdy it is, but you can use sourdough, Italian and regular white bread as well. Take it one step further and make a cornbread stuffing.

Sausage: Cook up some sausage (mild or spicy) and mix it into the stuffing as well. Sausage stuffing is so hearty and a nice way to bulk it up with some extra protein.

Just when you thought this stuffing recipe couldn’t get any easier, here we are! 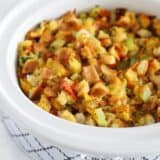 To make this recipe easier, you can buy the store-bought stuffing cubes.   Drying bread: The first step in this recipe is drying the bread. You can place the bread cubes on a baking sheet and sit out to dry for 1 to 2 days, or you can lightly toast in the oven. Simply preheat the oven to 200°F. Bake for 20 minutes or until lightly toasted, tossing half way. Make-ahead: Prepare as directed and cover the crockpot bowl with foil and place in the refrigerator. When ready to bake, remove stuffing from the refrigerator cook as directed. You may need to add 30 extra minutes to the cooking time.  Variations:
Calories: 279kcal | Carbohydrates: 19g | Protein: 10g | Fat: 18g | Saturated Fat: 8g | Cholesterol: 48mg | Sodium: 583mg | Potassium: 258mg | Fiber: 2g | Sugar: 2g | Vitamin A: 2228IU | Vitamin C: 6mg | Calcium: 35mg | Iron: 2mg