Melt in your mouth brown sugar and cinnamon pancake syrup. Made with 5 simple ingredients in just 15 minutes!

If you’ve never made homemade pancake syrup, you are missing out! It’s so much better than store-bought and is actually really easy to whip up. This cinnamon pancake syrup is a favorite, as well as buttermilk syrup and homemade maple syrup. Yum!

I recently shared my pumpkin pancake recipe and made this delicious cinnamon syrup to serve with it. The syrup was the perfect addition and had a melt in your mouth brown sugar and cinnamon flavor. Plus it was SO easy…made in 15 minutes with only 5 simple ingredients!

Once you make this recipe, you may never buy store bought again! It’s THAT good. It makes the perfect addition to pancakes, waffles and french toast! This would also taste delicious served over desserts like a baked apple crisp with ice cream. Seriously divine!

How to Make Pancake Syrup

There are SO many delicious ways to serve this cinnamon syrup. It tastes great on classic breakfast recipes like pancakes, waffles and french toast. But also would taste amazing drizzled on top of desserts, too!

This syrup will keep for up to 1 month if stored in a covered jar in the refrigerator. I like to keep mine in a glass mason jar. To reheat, heat in the microwave for 30 seconds at a time until it’s warm. 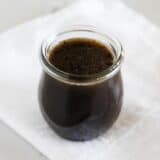 Store in a covered jar in the refrigerator for up to 1 month.