A homemade version of the fudgy, chewy, chocolaty brownies with rainbow chips that everyone loves! These easy cosmic brownies are made with just 20 minutes of prep time!

Out of This World Delicious!

This copycat cosmic brownies recipe is so full of whimsy and childhood nostalgia! The familiar fudgy brownies are topped with a rich chocolate ganache which might remind you of my ultimate frosted brownies if you’ve ever had them. The cosmic brownies have bright and cheery colorful candy-coated chocolate sprinkles on top, which is what sets them apart!

Homemade cosmic brownies taste even better than the ones that come individually wrapped in a box. You know, the kind we used to love having as a treat in our lunch box? They were the best back then, but as adults, we now know that making them from scratch is even better!

We get to combine the memories and the wholesome ingredients in a way that is perfect for kids and the kid in all of us!

Why This Recipe Works

Find the full printable recipe below.

How to Make Cosmic Brownies

Why are they called cosmic brownies?

Back in the late 90s when the cosmic bowling trend became a thing, the Little Debbie company created brownies with fudge icing to represent the darkness and colorful candies to represent the neon lights. A beautiful galaxy if you will ;)

Can I make these in advance?

Make the brownies up to 24 hours ahead of time. Then make and pour the ganache on top and let it set just before serving.

What candy is on a cosmic brownie?

The classic store-bought version uses candy-coated chocolate chips just like we are in this recipe. I found the Wilton brand works great.

Keep these treats covered in an airtight container on the counter or fridge for up to 3 days. You can also keep them in the freezer for up to 3 months.

END_OF_DOCUMENT_TOKEN_TO_BE_REPLACED 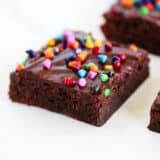 Storage: Store in in a covered container at room temperature or in the refrigerator for up to 3 days. Freeze up to 3 months. Topping: If you can’t find rainbow chips, you can use any sprinkles you’d like.