I whipped up this easy cinnamon frosting last week when I was making my favorite apple pie cupcakes. My classic buttercream is usually my go-to recipe, but I wanted to add a bit more fall flavor and the simple addition of cinnamon was just perfect.

This frosting has a super smooth and creamy consistency with the perfect hint of spice from the cinnamon. It adds a warm and cozy flavor and tastes amazing in the fall on all your favorite apple desserts and pumpkin recipes.

How to Achieve the Perfect Consistency

There are a few simple tips and tricks that I’ve learned over the years in order to reach the perfect frosting consistency. These are easy suggestions that make a big difference in texture!

This buttercream is perfect for piping on top of cookies, cakes & cupcakes. You want the frosting to be thick enough to hold a point, so make sure not to add too much heavy cream or heavy cream when mixing it together.

I like to use a 1M star tip to pipe the frosting on top of my desserts. This recipe will frost about 12 cupcakes when using a piping tip (although you can double the recipe if you need more). Learning how to frost the perfect cupcakes is simple when using this cinnamon buttercream!

Skip the piping tip and use a zip top bag instead! Simply add the frosting into the bag and then snip one of the corners off to make a small opening. It pipes nicely onto your baked goods similar to a piping tip, but with less effort!

This frosting can sit out at room temperature for up to 48 hours. Any longer than that should be stored in the fridge. About an hour or two before serving, remove it from the fridge to let soften.

You can also freeze any extra buttercream you have leftover in a freezer bag for up to 3 months. Then when you’re ready to use it, just stick it in the fridge overnight to thaw.

Ways to Use Cinnamon Buttercream: 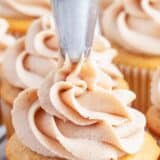 Piping: If you’d like to pipe the cupcakes like I have in the photos, you will want to double the frosting. I like to use a 1M tip. Check out this post: how to frost a cupcake. Variation: If preferred you can use a cinnamon cream cheese frosting which is on these churro cupcakes.
Calories: 171kcal | Carbohydrates: 25g | Protein: 1g | Fat: 8g | Saturated Fat: 5g | Polyunsaturated Fat: 1g | Monounsaturated Fat: 2g | Trans Fat: 1g | Cholesterol: 22mg | Sodium: 69mg | Potassium: 5mg | Fiber: 1g | Sugar: 25g | Vitamin A: 255IU | Vitamin C: 1mg | Calcium: 4mg | Iron: 1mg
Course: Dessert
Cuisine: American
Author: Jamielyn Nye