This recipe for cinnamon roll cookies is simple to make and will have you looking like a total baking rock star. You won’t believe how delicious these cookies are!

The texture is almost cake-like and is super soft and delicious. Then it’s topped with a luscious cream cheese frosting and a little sprinkle of cinnamon. Pure heaven!

Although these are one of our favorite Christmas cookies, this treat tastes festive year-round too. I love that pop of flavor you get as you sink your teeth into them. Seriously to die for!

My favorite part of any cinnamon roll is always the icing. Did you know that you can buy just the icing at those cinnamon roll kiosks at the mall? People would always ask for extra icing, and eventually, they wised up and started charging for it. This helps me know I’m not alone in my icing addiction! :)

Thankfully, these cookies have an easy to make cinnamon roll frosting on them that’s better than anything you can get from a mall. Plus, since it’s your cookie, you can put as much or as little icing on it as you’d like. I say the more the merrier!

Instructions: In a large bowl, beat together the cream cheese and butter. Then add in powdered sugar and beat until smooth. Add in vanilla and milk as needed until desired consistency is met. Beat until light and fluffy. Then pipe the frosting onto the cooled cookies and add a sprinkle of cinnamon.

As you’re making this cinnamon roll cookie recipe, keep these tips and tricks in mind to help you get the best results possible.

Love warm spiced treats with icing? This eggnog cupcake will also be a new favorite! 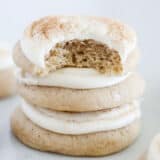 Freezer instructions: Allow cookies to cool completely. Place on a baking sheet and then freeze 30 minutes. Once the frosting has hardened you can stack in a covered container. Take out 1 hour before ready to serve.  Variation: You could also serve these cookies with a cinnamon buttercream or drizzle with a cream cheese glaze.