Moist and fluffy cupcakes stuffed with a sweet apple filling and then topped with cinnamon buttercream. These apple pie cupcakes are the perfect fall dessert to try this season!

These apple pie cupcakes are a great solution for when you’re craving homemade apple pie, but want an easier alternative. Just grab a box of your favorite yellow cake mix and some canned apple filling and you’ll be on your way to making delicious apple filled cupcakes in no time.

They combine all of the comforting flavors you know and love about the classic fall pie, but in cupcake form. Each bite is soft and fluffy, with the perfect ratio of apple filling to cinnamon buttercream.

These are the ultimate fall cupcakes and are the perfect way to celebrate the season. Once you give them a try, they will definitely be high on your list of favorite apple desserts!

Reasons We Love These Cupcakes

This cinnamon buttercream is the perfect compliment to these apple pie cupcakes. It’s rich, creamy and has a hint of spice flavor from the cinnamon without being too overpowering.

You can either pipe the frosting on the cupcakes, or use a knife to spread it over the tops. Piping will require more frosting, so I’d recommend doubling the buttercream so that you have enough. I like to use a 1M star tip for best results.

After the frosting is on, drizzle some salted caramel sauce over the tops to take these cupcakes to the next level. Trust me, you won’t regret it!

Learn how to frost the perfect cupcakes with this easy step-by-step tutorial. With only a few simple tools, you’ll be frosting bakery-style cupcakes in no time. 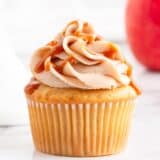