A Fun Twist on Cinnamon Rolls

There’s nothing better than a piece of warm, gooey sticky bread. It’s soft, sweet and seriously divine. Although this cinnamon monkey bread is my favorite, my apple pull apart bread and caramel apple monkey bread are close seconds.

My kids love this cinnamon roll monkey bread more than the original recipe. My daughter even claims she likes it better than my homemade cinnamon rolls. In my opinion, nothing beats those. But this is much easier to make and delicious when you want something quick and easy!

This easy monkey bread is very rich and sweet…you could basically call it a dessert. We love to serve it warm with a cold glass of milk. It’s perfect for special occasions, Sunday night treats and Christmas morning served along side fresh fruit and this breakfast casserole.

How to Make Cinnamon Monkey Bread

Start by making the cinnamon sugar mixture by combining both sugars and the cinnamon in a small bowl. Then remove the cinnamon rolls from the package and cut each biscuit into 4 pieces.

Lightly dip each biscuit piece in the melted butter, then dip in cinnamon sugar mixture until evenly coated. Then begin to layer the pieces into a generously greased 12-cup bundt pan.

Bake and Remove from Pan

Once all pieces are coated and layered in the bundt pan, place in oven and bake at 350°F for about 30 minutes. Remove from oven and let the cinnamon monkey bread sit in the pan for about 10 minutes.

Then place a plate (or cake stand) on top of the bundt pan and quickly flip over. Gently tap on the counter to help release the bread from the pan.

Spoon the frosting from the cinnamon roll can into a zip top bag. Snip off one of the corners and drizzle the frosting on top of the monkey bread. Enjoy! 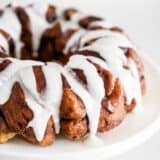