Whip up a batch of homemade Chex mix just in time to settle in for movie night! Make a big bowl of this salty, savory, crunchy snack for everyone to share, and grab yourself a handful!

I make this homemade Chex mix recipe anytime I’m craving something salty, savory, and crunchy, and lucky for me, this recipe chex all the boxes! It’s made with Chex cereal, pretzels, and nuts, coated in a salty and savory mixture then baked until crispy and irresistible!

It’s one of the most requested food snacks my kids ask for when they’re having sleepovers, parties, or movie nights. It makes a big batch so there’s usually tons left for lunchboxes the next day. I’ve made it in both the oven and slow cooker but I do tend to use the oven when I want that extra bit of crunch.

This homemade version is so much better than a store-bought bag. Not only is it much more cost-effective with more control over what’s in it, but when you make your own, there’s never that disappointment of hitting the bottom of the bag. When you reach the bottom of the bowl, you just whip up another batch!

How to Make Homemade Chex Mix

Try Adding Some of These!

This will last up to about 1 week, which is great if you’ve made a big batch. A week’s worth of snacks for the win!

Store it in a brown paper bag or airtight container and have easy access to it anytime you want. 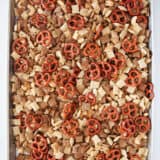 5 from 2 votes
↑ Click stars to rate now!
Author: Jamielyn Nye
Whip up a batch of homemade Chex mix just in time to settle in for movie night! Make a big bowl of this salty, savory, crunchy snack for everyone to share, and grab yourself a handful!
Prep Time: 5 mins
Cook Time: 45 mins
Total Time: 50 mins
Servings: 12
Print Rate Pin

Slow cooker: To make this in the slow cooker, dump the Chex into your slow cooker and turn to low. Cook for 3 hours and stir every hour. Storage: Store in a covered container or brown paper bag up at room temperature up to 1 week.