Just 5 minutes of prep for tender, juicy crockpot spiral ham every time! You will never fix ham any other way again. This is the perfect recipe for holiday meals!

We love to serve this slow cooker spiral ham for our Christmas dinner. It’s so simple, delicious and is always a favorite. Sometimes I’ll make an oven baked ham, but this slow cooker version is definitely easier and requires less work!

Today I am sharing the easiest and tastiest ham recipe ever. Seriously, after cooking this slow cooker ham, I will never mess with cooking one in the oven ever again. It’s made with just 5 ingredients and you just set it and forget it. Let your crock pot do the cooking for you!

We always have ham during the holidays, especially Christmas, Thanksgiving and Easter. It’s been a tradition ever since I can remember. This recipe is so simple and it turns out amazing every time. You literally can not mess it up, I promise! Plus, cooking the meat in a slow cooker frees up oven space for side dishes.

Other than the ham itself, this crockpot ham recipe only calls for 5 ingredients, which you probably already have at home in your pantry. It’s made with brown sugar, pure maple syrup, pineapple juice, spicy brown mustard, and balsamic vinegar.

You get sweetness from the brown sugar, maple syrup, and pineapple juice and a tangy kick from the mustard and balsamic vinegar. These flavors are so incredible together!

TIP: There is no need to make the glaze ahead of time for this recipe. I just rub all of the ingredients into the meat and then let the slow cooker do all the work.

How to Cook a Spiral Ham in a Crockpot

If you’re wondering how to cook a spiral ham, it’s super easy using this crockpot method! Follow the steps below to get started.

TIP: If the ham you buy is too large for your slow cooker, don’t worry. I used a 10 pound ham and it was too big for the lid of my slow cooker to fit. Just place 3 pieces of heavy-duty aluminum foil over the top of the ham, covering tightly. You basically are steaming it with a tight seal.

How Long Does it Need to Cook?

Because we’re using an already cooked ham, the purpose of this recipe is to warm it up while adding delicious flavor with the glaze and tenderizing it with the pineapple juice. I typically cook mine in the crockpot on low for 4 to 5 hours, until it’s warm, tender and juicy. Make sure to baste twice during the last hour of cooking. I recommend using a bone-in spiral-cut ham that’s about 7-10 pounds.

There are so many delicious side dishes to serve with this recipe. Below are some of our favorites!

“I’ve made this multiple times, it’s my family’s favorite ham, they actually thought I bought it from the Honey Baked store which was their previous favorite. Thank you so much!!“ 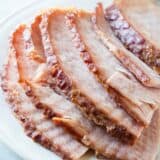 If the spiral ham you buy is too large for your slow cooker, don’t worry. I used a 10 pound ham and it was too big for the lid of my slow cooker to fit. Just place 3 pieces of heavy-duty aluminum foil over the ham, covering tightly. You basically are steaming it with a tight seal.