This loaded baked potato casserole is made with baked potatoes, sour cream, cheese, and bacon, then baked until melty and scrumptious. A welcome addition to any table!

One of my favorite side dishes is twice baked potatoes. This version is a little easier and tastes just as delicious. It’s a great way to use up leftover baked potatoes. We love to serve it with baked BBQ chicken and oven roasted vegetables. 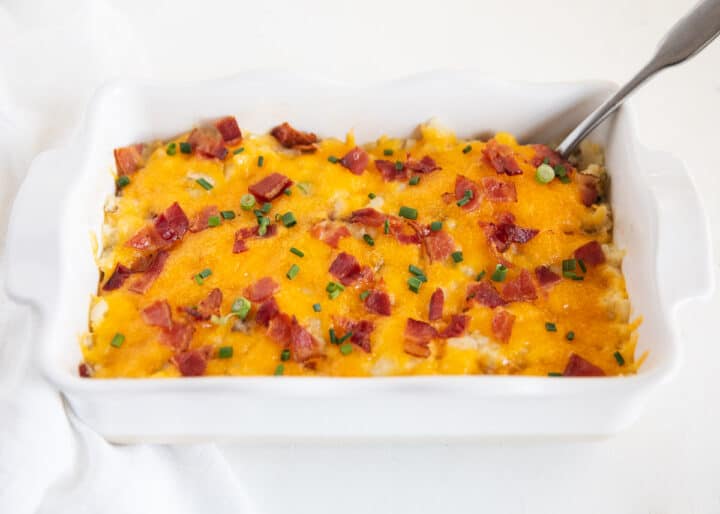 If you love twice baked potatoes as much as I do, and casseroles the same amount, with some extra room in your heart for a heaping pile of mashed potatoes, then this loaded baked potato casserole is for you! A no-fuss comfort dish to bring to a BBQ, serve at a potluck, or make during the holidays.

It is also a family favorite, so when I make it on the weekend I always make sure to make enough for leftovers for a couple of lunches! It’s a great make-ahead dish, so I love that I can have it ready to pop in the oven when I’m ready to heat it through.

This baked potato casserole will remind you of all of the major flavors and textures of a loaded baked potato or a twice-baked potato but in the form of a casserole. Soft pillowy potatoes, ooey-gooey cheese, salty bits of crispy bacon, sour cream, and onions. It’s a party-sized version of a twice-baked loaded potato, which makes for easy entertaining! It’s a dish you can carry from the oven straight to the table and it’s always a crowd-pleaser. 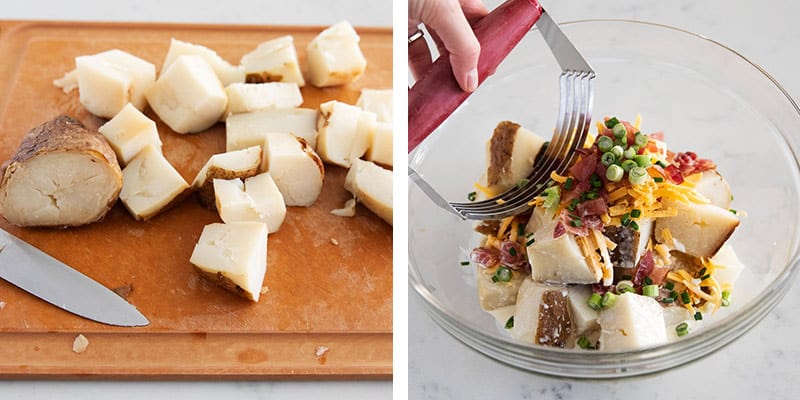 Before we move on we need to get down to some serious business. What is the difference between a loaded baked potato and a twice-baked potato anyway? And if you’ve tried both, which do you prefer?

The loaded baked potato is baked until the outer skin is nicely crisp, and the inside is baked, soft, and slightly fluffy. It is then loaded with all of the delicious toppings available to you. Traditionally it’s sour cream, bacon, cheddar cheese, and probably green onions or chives.

The twice-baked potato goes one step beyond this. After the first bake, the inside flesh of the potatoes is scooped out into a bowl, mashed together with butter, cream, sour cream, and salt and pepper, then put back into the crispy skins, topped with the cheese, bacon, and onions and then baked again. Now, add these two together and you’ve got a loaded twice baked potato casserole. It’s the best of everything! 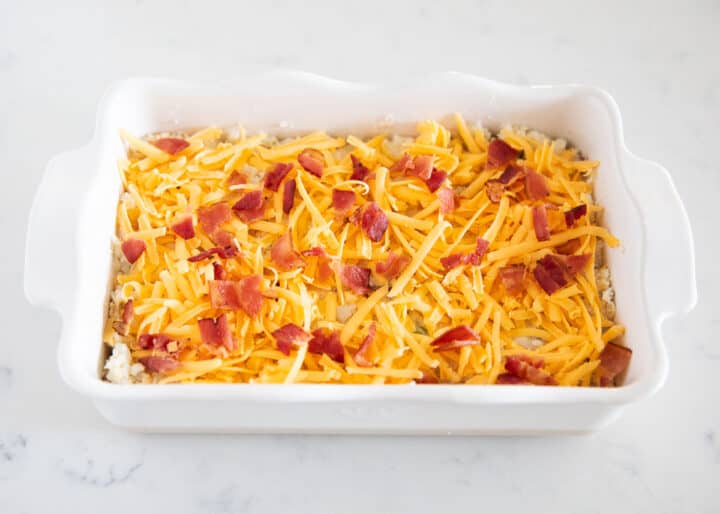 Should I peel my potatoes first?

No! I know it seems a little counterintuitive when thinking about mashed potatoes, but since we’re baking them and not boiling them, you want to leave the skin on. It’s what keeps the structure. Besides, bits of crispy skin in your casserole is kind of amazing. Before you begin mashing you can try and get rid of as much of the skin as you want. 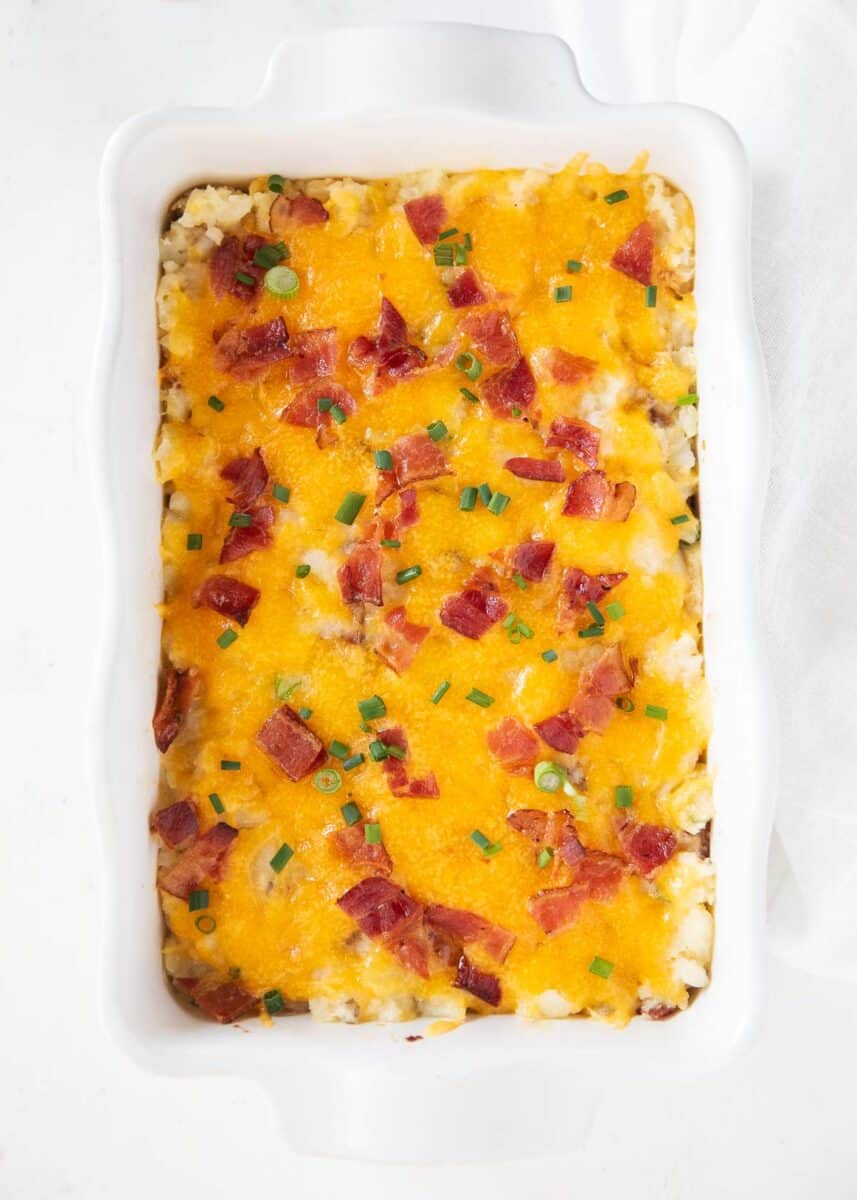 To store: Once cooled, store leftovers in the fridge, covered, for up to 3 days.

To freeze: This dish freezes well, but keep in mind potatoes are a little funny when kept frozen. When they thaw you may find the consistency has changed and they’re a bit watery. If this happens, just add a bit more sour cream and butter before reheating.

To Reheat: If reheating from frozen, bake in the oven for 25-30 minutes until heated all the way through. You can also use the microwave if you’re just reheating an individual serving size. 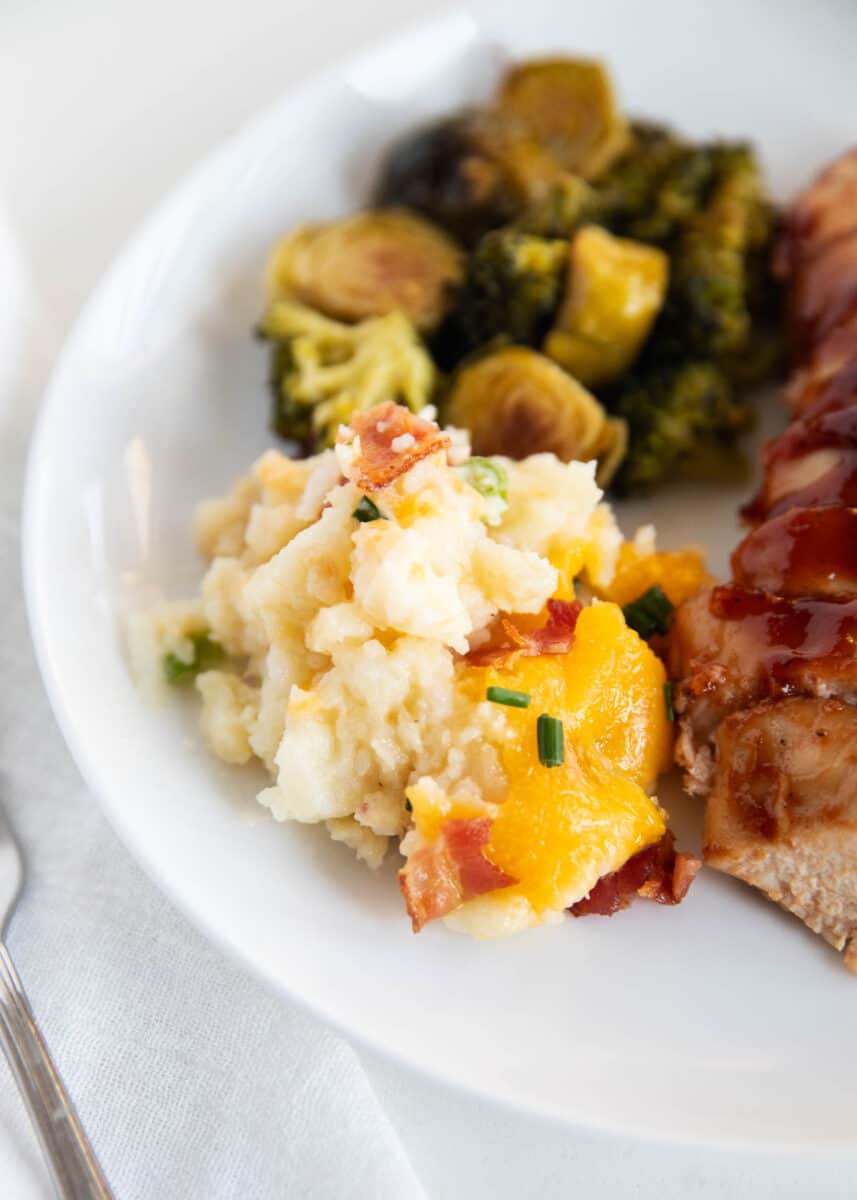 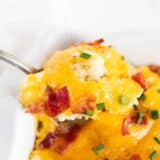 Other sides to try