Rich and decadent marshmallow brownies topped with gooey marshmallows and a chocolate frosting. This tasty treat is nothing short of delicious!

If you are a fan of my s’mores bars, then this dessert is for you! It’s the ultimate indulgence and is made with double chocolate and fluffy marshmallows. Once you have a bite, you will be quickly converted!

I remember having these marshmallow brownies (also known as Mississippi mud brownies) at a friends house growing up. I immediately fell in love after my first bite. I’ve thought about them ever since and couldn’t wait to make them myself. Love finding older recipes!

These brownies are so yummy and pretty much any kids (or adults) dream. They start with a fudge brownie base like these chocolate mint brownies. Top with gooey marshmallows and a chocolate buttercream frosting. Seriously amazing. They’re very rich and decadent, so I prefer to cut them into smaller size squares for serving.

Brownie layer: The base of this delicious dessert is the brownie layer. I use a box of brownie mix to keep it simple. You could always make your own homemade recipe, but I like to save time by using the box mix. You honestly can’t tell the difference!

Marshmallow layer: The brownies are then topped with a layer of mini marshmallows. They cook in the oven for just a few minutes until they’re puffed up and gooey.

How to Make Marshmallow Brownies 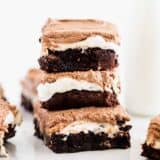 If you make in a 9×13″ pan, you may want to double the frosting and use an extra cup of mini marshmallows.  Make sure to use fresh marshmallows for optimal flavor.  If you want to make these brownies even richer, add 1/2 cup chocolate chips in the brownie batter before baking.