How to Make Cool Whip

Learn how to make cool whip with just 4 simple ingredients! It’s perfectly light and fluffy with amazing flavor. Makes a great topping for so many of your favorite desserts!

Making homemade cool whip has never been easier. In just 5 minutes, you’ll have the most fluffy and delicious whipped topping you’ve ever tried. It tastes amazing on so many desserts, but I especially love to use it on my jello poke cake, watergate salad and my no-bake chocolate lasagna.

I recently made homemade cool whip and I am obsessed! It tastes WAY better than store bought and has the perfect texture and flavor. I love how fresh it is and that you don’t have to worry about any extra preservatives added in.

The great thing about this whipped topping is that it will hold it’s shape for about 24 hours (similar to stabilized whipped cream). The gelatin helps makes it sturdy, so it won’t deflate quickly like homemade whipped cream does. You can use it cup for cup for any recipe that calls for cool whip.

It makes a delicious frosting or topping, can be mixed into your favorite dessert recipes or even used as a dip with fruit. And let’s not forget enjoying it by the spoonful because you definitely won’t be able to resist!

It takes so few ingredients to create a rich and creamy homemade cool whip.

Find the full printable recipe with specific measurements below.

How to Make Homemade Cool Whip

It takes so little time and energy to make your own cool whip at home.

Can I use the same amount of this homemade cool whip as store-bought cool whip?

You sure do! Just replace store-bought cool whip with the exact same amount of this recipe. Simple as that.

Can I make this easy homemade cool whip recipe dairy-free?

I haven’t tried it, but I have heard that coconut cream can be a great dairy-free substitute that works well.

Can I use this recipe to make cool whip frosting?

If you’re looking for a frosting that is similar to a whipped cream frosting, this recipe will do the trick. You could even add a few drops of food coloring to make it more decorative, if you like.

This homemade cool whip is best if stored in the fridge. You can make it a day in advance, then cover and refrigerate until serving. It will hold it’s shape for about 24 hours.

Favorite Ways to Use It 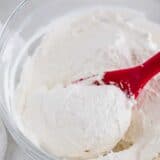 How to Make Cool Whip

Make-ahead: This recipe can be made 1 to 2 days in advance and stored in the fridge.  Storage: Store in an airtight container in the refrigerator up to 24 hours.

More recipes to use it in