Sweet and tangy with the warmth of cinnamon, this cinnamon cream cheese frosting will take your desserts to the next level. It’s made with only 5 ingredients and can be whipped up in 10 minutes! Great on cakes, cookies, and cupcakes, this frosting just can’t be beat.

If you’re looking for a change from the more classic version of cream cheese frosting, then this is the recipe for you. This version is made in the same way as the traditional one by creaming butter, sugar, and cream cheese together, but then you’ll add a pinch of cinnamon which adds a comforting warmth to the sweetness.

This has quickly become one of my go-to frostings. It’s simple to make, with a creamy smooth texture and it’s very easy to spread. The flavor is so good that I’ve been known to eat right off the spoon! It pairs well with many Fall treats like my pumpkin cookies and apple pie cupcakes. I hope you love it as much as I do!

One of the great things about this frosting is that you only need 5 baking staples to make it.

Why is my cream cheese frosting runny?

Can I also add cinnamon to buttercream frosting?


Yes! If you’d prefer to leave out the cream cheese and make a buttercream frosting instead, a touch of cinnamon added to the buttercream is delicious as well! Check out my recipe for cinnamon buttercream.

The frosting is best stored in an airtight container for up to 3 days in the refrigerator.

Great Ways to Use This Frosting

You can use this frosting recipe on so many cakes, cupcakes, and cookies. Some of my favorite ways to pipe it or slather it on include: 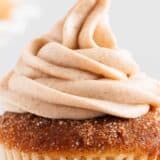 5 from 3 votes
Sweet and tangy with the warmth of cinnamon, this cinnamon cream cheese frosting will take your desserts to the next level. It’s made with only 5 ingredients and can be whipped up in 10 minutes! Great on cakes, cookies, and cupcakes, this frosting just can’t be beat.
Prep Time: 10 mins
Total Time: 10 mins
Servings: 24
Print Rate Pin

Softening: Make sure the cream cheese and butter are at room temperature before you begin to mix. Using them cold will create lumps in your frosting. Check out these tips for how to soften cream cheese and how to soften butter. Butter: If you only have unsalted butter, adding a pinch of salt to the butter while creaming will also do the trick. Cinnamon buttercream: You can omit the cream cheese and double the butter to make a cinnamon buttercream instead.
Serving: 1cupcake | Calories: 77kcal | Carbohydrates: 10g | Protein: 1g | Fat: 4g | Saturated Fat: 2g | Polyunsaturated Fat: 1g | Monounsaturated Fat: 1g | Trans Fat: 1g | Cholesterol: 12mg | Sodium: 36mg | Potassium: 10mg | Fiber: 1g | Sugar: 10g | Vitamin A: 139IU | Vitamin C: 1mg | Calcium: 7mg | Iron: 1mg