This easy French baguette recipe is a delicious loaf of bread with a golden crust and a soft yet sturdy crumb. There is nothing better than having a basket of crusty bread on your dinner table, except maybe knowing you made it yourself!

Fresh homemade bread is something everyone should make at least once! Believe me, it’ll be way more than once when you realize just how easy it is without the need for a Dutch oven or bread maker!

Making an authentic French baguette recipe sounds all kinds of fancy, but once you know how to proof yeast and how to measure flour there’s nothing more to it! Just a little bit of rising time and in under 2 hours you’ll have your house smelling like a bakery!

The ingredients in both of these recipes are the same. The measurements are slightly different which in turn changes the texture of the bread as well as the shape. A baguette is long and thin loaf with a sturdier crust. French bread is a wider loaf with a softer crust and is more often used to make sandwiches whereas baguettes are more often used for things like bruschetta or dipping with spinach artichoke dip.

With that being said, you can use them interchangeably for basically anything! Even just to have a loaf of bread to break apart to sop up remaining sauce or to serve on the side of soups and stews.

How to Make French Baguette

This recipe is adapted from my homemade French bread recipe with just a couple of minor tweaks. So once you know how to make one, you know how to make the other. Let’s call it a 2 for 1 recipe deal too good to pass up! It’s a great recipe for beginner bakers and every simple step is laid out for anyone just starting their bread-making journey.

TIP: You’ll know your bread is done baking when you knock on it, it sounds hollow. Sometimes I like to brush mine with melted butter before serving. So good.

What Makes a Good Baguette?

A beautiful outer crust, whether it’s ultra crusty and crispy, or thin and chewy, for starters! It should sound hollow with a glorious crackle sound when you press on it. You want it to have a soft interior crumb, but sturdy enough that it won’t fall apart when using it as a sandwich or to sop up marinara sauce.

Ways to Use Fresh Baguette

There are endless ways to use a baguette. My kids love a slice on their plate of spaghetti and meatballs but below are some more exciting ways to enjoy your very own loaf of homemade bread.

What to do with Leftover Baguette

Still have some not-so-fresh baguette leftover? Good because it makes the most amazing homemade croutons or breadcrumbs!

How can I make an even crustier crust?


If you like an even crustier crust, place a metal baking dish or cast-iron skillet containing boiling water on the lowest rack. Place the loaf on the middle oven rack and shut the oven door immediately. Creating steam allows the outside crust to expand as the bread rises and forms a nice outer layer that settles into a nice crust once the bread stops rising.

Can I make it a chewy crust instead?


If you like the chewier texture of bread, and a slight difference in taste, swap the all-purpose for bread flour.

What is the difference between instant yeast and dry active yeast?


Instant yeast doesn’t require the initial proofing with water and sugar/honey to activate it. It activates on its own when incorporated into the other ingredients. I prefer to use dry active yeast and proof it first just to make sure it’s still alive. Plus, it’s just a few extra minutes I don’t mind taking!

Can I use whole wheat flour?


You can, but whole wheat flour is heavier and denser. It will change not only the flavor of the bread but also the texture. If possible, use a combination of whole wheat flour and bread flour to balance it out. 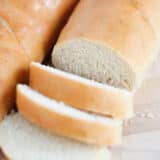 4.80 from 5 votes
↑ Click stars to rate now!
Author: Jamielyn Nye
This easy French baguette recipe is a delicious loaf of bread with a golden crust and a soft yet sturdy crumb. There is nothing better than having a basket of crusty bread on your dinner table, except maybe knowing you made it yourself!
Prep Time: 1 hr 10 mins
Cook Time: 20 mins
Resting time: 1 hr
Total Time: 1 hr 30 mins
Servings: 32
Print Rate Pin

Crispy crust: I prefer a soft crust, but for a crispier/shinier crust, brush 1 egg white (whisked) with a teaspoon of water before baking French baguette You can also cook a few minutes longer.  Storing: This bread stores best in a brown paper bag on the counter.  Freezer instructions: Allow to cool and then place in a large zip top bag to freeze (preferably before slicing). Remove all the air from the bag and then freeze up to 3 months. Thaw overnight on the counter. Reheat in the oven at 300°F for 5 minutes.