Add some warmth to your chilly fall mornings with a batch of homemade pumpkin cinnamon rolls. These fluffy rolls swirled with a buttery, cinnamon sugar and pumpkin spice filling topped with a maple glaze can be made ahead and frozen for months!

Cinnamon rolls give off a distinctly pleasant aroma, whether you’re passing by a bakery or they’re fresh from your oven. There’s just no mistaking one of the world’s best smells!

This time, we’ve taken classic cinnamon rolls and made them with pure pumpkin and pumpkin pie spice for a delightful fall twist! They’re made with pillowy soft dough filled with a cinnamon sugar and pumpkin spice swirl and a maple cream cheese glaze.

If I had known that most cinnamon roll recipes were as easy as they are, I would have been making them way sooner! Sure, there are a few moving parts, but each one is super simple and totally worth making pumpkin cinnamon rolls from scratch.

While I do love my overnight cinnamon rolls for Christmas, these are perfect for Thanksgiving. It’s one of the best pumpkin recipes you’ll try this fall!

Why This Recipe Works

Find the full printable recipe with specific measurements below.

How to Make Pumpkin Cinnamon Rolls

You can also stick with the classic cinnamon roll frosting or cream cheese frosting if you prefer. They also go with the pumpkin flavor.

Assemble the rolls up until the point you’ve sliced the log and added the rolls into a greased baking dish. Cover the pan tightly with plastic wrap them place them in the fridge for up to 16 hours.

The cold will hinder the rising process, so you’ll have to pull them out the next morning for about an hour before you’re ready to bake. Allow them to rise until doubled. Dab with a paper towel if there is too much liquid. A little is ok.

END_OF_DOCUMENT_TOKEN_TO_BE_REPLACED 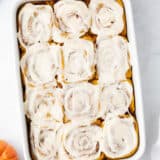 Rising tip: Turn the oven to 175°F. Once preheated, turn off the oven and place the dough inside to rise.  Make ahead: Before the 2nd rise, cover the pan tightly with plastic wrap and then place in the refrigerator for up to 16 hours. Then the next morning, pull them out onto the counter and let them rise until doubled, about 1 hour. It is normal for there to be a little liquid, but if there’s too much, get a paper towel and dab it out. Freezing the cinnamon rolls: You can freeze the cinnamon rolls after they have been baked and cooled. Simply place in a freezer container or zip-top bag. Place in refrigerator to thaw overnight. Warm individual rolls in microwave for 10 to 20 seconds.