Silky smooth pumpkin cheesecake with a flavorful gingersnap crust. This is the ultimate dessert recipe to make this fall season!

The Best Ever Fall Dessert

This easy pumpkin cheesecake has been on my list of pumpkin recipes to make this fall season. I love both cheesecake and pumpkin pie, so I thought why not combine the two to make one dangerously delicious dessert?

After taking just one bite, I was hooked! It’s silky smooth with the perfect velvety texture and filled with warm spices and fresh pumpkin flavor. And instead of a graham cracker crust, I used a gingersnap crust to give it even more fall flare.

This pumpkin cheesecake is definitely a show stopper and is a great dessert to serve for a crowd. Whether you’re bringing it to a Halloween party or adding to your Thanksgiving menu, it’s bound to be a hit!

This recipe would also taste delicious with a classic graham cracker crust, Oreo crust or a salted pretzel crust.

You may also make mini pumpkin cheesecakes instead of using a 9-inch springform pan. Simply make the crust and filling as directed, then divide them evenly into each muffin cup. Bake the crust first, then add the filling and bake until the tops have puffed up (about 20 to 25 minutes).

How to Make Pumpkin Cheesecake

Once you’re ready to serve, it’s time to add some decorative toppings. I like to pipe homemade whipped cream around the edges, as well as add a drizzle of salted caramel sauce on each slice. You can also add some additional gingersnap crumbles, candied pecans, a sprinkle of cinnamon or even some pumpkin candies!

How do you know pumpkin cheesecake is done?

The top should be set and puffed up nicely. The cake should also only jiggle slightly when gently shaken from side to side.

A toothpick test is a good way to tell if the cheesecake is done. Simply insert the toothpick in the center of the cake. If it is clean, that means it’s cooked through.

Should a cheesecake be brown on top?

Not necessarily, although it’s okay for the edges to get slightly golden when baking. Too much browning on the top can be a sign of an overdone cheesecake, so make sure to keep an eye on it closely as it bakes.

Do you have to let cheesecake cool before refrigerating?

Yes, this is an important step! It needs to come to room temperature first and should not be warm when refrigerating. Once it has cooled down, transfer to the fridge and let chill for at least 3 to 4 hours (or overnight is even better).

How to Store Pumpkin Cheesecake

This pumpkin cheesecake will stay fresh in the fridge for up to 5 days. Just make sure to tightly cover the top with plastic wrap or aluminum foil before storing. It can also be frozen for up to 2 months. When ready to enjoy, simply let sit on the counter until soft or place in the fridge overnight to thaw.

“This melts in your mouth & is so incredibly delicious!! The gingerbread crust is my fav!”

END_OF_DOCUMENT_TOKEN_TO_BE_REPLACED 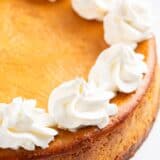 Crust: If you do not have gingersnaps, you can also use a graham cracker crust.  Mini pumpkin cheesecake: Instead of using a 9-inch spring form pan, you can use a muffin tin to make mini pumpkin cheesecakes. Make the crust and filling as directed, then divide them evenly into each muffin cup. Remember to bake the crust first, then add the filling and bake until the tops have puffed up. The mini version won’t need to bake as long as the 9-inch cheesecake, only around 20 to 25 minutes. Storage: Tightly cover the cheesecake with plastic wrap and store in the refrigerator for up to 5 days. To freeze, wrap tightly in plastic. It can be frozen for 2 months. When ready to eat, defrost in the refrigerator overnight or let sit on the counter until soft.